Finding A New Voice After Cancer 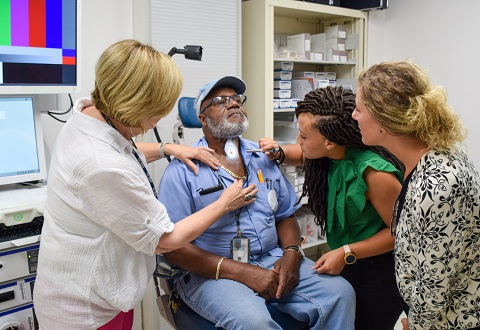 By Randy D. McCracken
Friday, July 23, 2021
“First year I was in a real funk. I was vain and the operation changed the way I looked,’ said Arthur Daniels, “It was only after I met another cancer survivor who took the time to help me that I felt better- that’s when I stopped feeling sorry for myself.”

The operation Daniels needed to save his life – a total laryngectomy in which the larynx (voice box) is removed and the trachea (airway) is separated from the mouth and nose results in a person having to breathe through a small hole at their neck known as a tracheal stoma - changed more than his looks, it also changed his life.

“It changes so much - the way you speak, smell, swallow” said Arthur Daniels, an Army Veteran who needed this procedure for treatment of throat cancer. “It changed my entire lifestyle.”

After surgery and recovery Mr. Daniels was able to successfully return to work in Engineering Service of the Gainesville VAMC. In addition to the physical demands of being an engineer, Arthur needs be very careful to avoid dust and fumes from entering his lungs when working in the VA Medical Center. He helps protect himself by placing places a small filter, also known as heat and moisture exchange designed to replicate the functions of the nose, at the stoma.

“I used to have a commanding voice – I woke and I couldn’t even whisper, said Daniels. “The transition was tough, especially because if the work I do that requires so much communication through talking.”

Once the voice box is removed, the individual can no longer speak using the vocal cords however Veterans who undergo this procedure have several different options to regain their voice. In Mr. Daniel’s case, his surgeon placed a small opening between the trachea and the esophagus. Then a small round plastic tube (a voice prosthesis) was placed to keep the hole open and to allow air to flow into the esophagus. The air then vibrates the top of the esophagus to create a sound for speaking.

The initial voice prosthesis needed to be changed after swelling went down following surgery and now Arthur averages 3 to 4 months of use before he needs a replacement.
“Veterans are very fortunate to have access to a wide range of devices and supplies to assist with communication and breathing,” said Paula Sullivan, Speech Pathologist and member of the head and neck cancer team at the Gainesville VAMC. “Mr. Daniels has been able to demonstrate the ability to return to an active work and social lifestyle following a total laryngectomy.”

In the years following his surgery, Mr. Daniels continues to go out of his way to talk with and encourage other Veterans scheduled for a laryngectomy and provides support after surgery.

“I tell them this is not good or bad, it’s just different. Sure, some people chose not to understand people like me when we have to use an artificial voice, or they are not patient as we communicate but that happens everywhere. We often discount people in life if they don’t talk the way we want – if they use incorrect words or have an accent we don’t like. I tell other Veterans that it will be fine, we just drive on.”

Paula is thankful for Mr. Daniel’s willingness to volunteer and noted that “Veterans always appreciate the opportunity to talk to someone who has experienced the same surgery and challenges to recovery.” She indicated that Mr. Daniels is available around the clock to meet with a patient or family members and she is eternally grateful for assistance.
return to top

Get help from Veterans Crisis Line

If you are in crisis or having thoughts of suicide, visit VeteransCrisisLine.net for more resources.